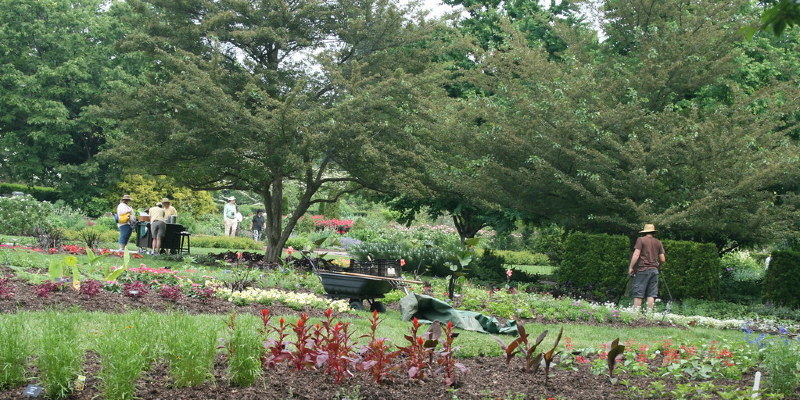 Elm trees (Ulmus spp.) , usually grown as shade trees, also work as both specimen and trees. Several elms show allelopathy, a procedure where roots, leaves or shoots secrete chemicals that kill or severely retard the growth of plants growing nearby. When selecting companion plants to develop alongside or beneath elms, be sure to know which type of elm you have. Decorative mulch may work best under elms using allelopathic trends. When selecting companion plants to get non-allelopathic elms, pick those are shade-tolerant and shallow-rooted.

In regards to the plant fluids secreted by elms, not all trees in the genus are created equal. University of Georgia categorizes American Elm (Ulmus americana), which grows in U.S. Department of Agriculture plant hardiness zones 3 through 9, as generating chemicals in its roots, stems and leaves that have the strongest allelopathic effect. By contrast, Chinese elm (Ulmus parvifolia), which grows in USDA zones 4 or 5 through 9, based on the variety, had just minor allelopathy through substances secreted from roots.

When planting under or following non-allelopathic elms, like winged elm (Ulmus alata), which grows in USDA zones 6 through 9, or Siberian elm (Ulmus pumila), which grows in USDA zones 4 through 9, consider small daffodils, like “Tete a Tete” (Narcissus “Tete a Tete”), which develop in USDA zones 3 through 9, that flower before the tree leafs out. Virginia bluebell (Mertensia virginica), a perennial, spring bloomer with blue blooms will even boom under elm trees. Hardy in USDA zones 3 through 8, bluebells defy the toxins secreted from other trees and may succeed under the marginally allelopathic Chinese elm also.

Shallow-rooted and comparatively low-growing, lily turf (Liriope muscari), which grows in USDA zones 5 through 10, features spikes of purple flowers in late summer through early autumn. Sometimes, the long, grassy leaves arch in rounded clumps. Lily turf thrives in the same consistently moist soil which most facilitates elms and tolerates the tree’s shade. Traditional hostas, or August lily (Hosta plantaginea), which grows in USDA zones 3 through 9, will also perform nicely alongside or beneath elms. The plants include broad, textured leaves and in late summer create substantial, scented, white blooms atop tall stems.

When planting alongside or beneath elms, dig carefully so you don’t disturb the tree’s roots. Probe gently using a trowel or small spade to find planting holes which lie between roots. Tree roots also use the vast majority of the water and nutrients from the ground around them, so mulch nearby plants with several inches of organic matter to conserve moisture and block weed growth. If you experiment with companion plants beneath or close allelopathic species, like American elm, watch carefully for signs of toxicity like yellow leaves. Remove affected plants promptly.